Lakmé Fashion Week kicked off yesterday with a selection of top designers presenting their summer/resort 2013 collection on the runway. One of my highlights is the talented duo Shivan & Narresh. They presented some fiercely sexy bathing suits, modern saris and some very sophisticated dresses in bright colors, monochromes or with stripes. It only got better when Manish Malhotra’s collection took the runway, celebrating 100 years of Indian Cinema. Before his collection hit the runway Malhotra told Marie Claire India that he has been contributing to Indian Cinema fashion for 23 years now, dressing the crème de la crème of Bollywood.

Before I start gushing about how lovely his collection was, I would like to share a brief history of 100 years of Indian Cinema. 2013 is the year that Indian Cinema celebrates its 100 year anniversary. In 1913 director Dadasaheb Phalke released the ‘first’ Indian film called ‘Raja Harishchandra’. Contrary to popular belief, the Hindi cinema ‘Bollywood’ is only a genre within Indian Cinema and not Indian Cinema itself. The independent ‘indie’ cinema of India has also gained a lot of popularity, with directors like Satyajit Ray (around 1955) and Anurag Kashyap putting indie cinema on the map internationally.

In the West the commercial Bollywood films attract the most audience. It all started with the film ‘Dilwale Dulhania Le Jayenge’ by legendary director Yash Chopra also nicknamed ‘The King of Romance’. This Bollywood classic starring Sharukh Khan and Kajol released in 1995 marked the start of international success for Bollywood films. Today Bollywood competes with Hollywood, releasing more films a year than the latter. An important aspect of cinema is costume design. Manish Malhotra has been a big name in Indian Cinema fashion for over 20 years. Dressing all the big names, two of which were present at Malhotra’s fashion show. As Malhotra calls actresses Kajol and Karishma Kapoor onto the runway at the end of his show he adds ‘My journey is incomplete without these two actresses, without them I wouldn’t have been here’.

Malhotra’s collection is a tour through Indian Cinema costume design history, starting off with classic and traditional black and white ensembles, moving on to bright colored sari’s and polka dot fabrics. It closes with modern day designs. Generation next stars Varun Dhawan and Sidharth Malhotra walk the runway in turquoise and soft pink suit jackets combined with white/crème trousers and shirts. Stunning actress, singer and beauty queen Priyanka Chopra walks the ramp in a bright green sari with pink border, stunning us with her beauty and grace along the way. The collection shows Malhotra can design anything, from traditional to modern for any body type and any generation. Also on the runway is famous director Karan Johar, actress Hema Malini and famous playback singer Asha Bhosle, who proudly walks the runway like a true supermodel showing us her sari from every angle. 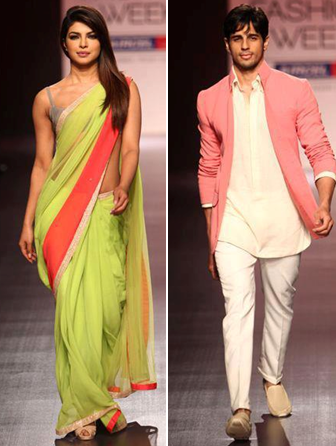