If it wasn’t for colonialism I probably wouldn’t be here today. Before people start to object, I am obviously not trying to justify any of the cruelty that came along with the process of colonialism, but am simply telling you a short story about my ancestors. Once upon a time in India, around 1895, a lady prepares for a long boat trip to South America. Final destination; a small South American country owned by the Dutch. Fast forward to the nineteen eighties, a young woman gets onto a plane to the Netherlands and ends up falling in love with a Dutch man. A love story much like the ones from classic Bollywood films, although I’m not sure if there was any dancing and singing in fields of flowers involved. Eventually they got married and got kids, one of which is moi. Interesting and quick journey through history you might say. I have always been proud to say I am of mixed race and am able to benefit from the different cultures that I own.

In a very globalized world we get to enjoy many cultures, by travelling, or simply by watching television or engaging in conversations with people from different cultures. The meeting between West and East is not a new phenomenon, for example, it is well known that some of Spain was ruled by Muslim leaders around 1330. A visit to the fortress and palace ‘Alhambra’ in Granada, Spain takes you on a journey through Spanish history. A palace that shows the greatness of Islamic architecture in the middle of this European city. As a fashion addict I could not resist buying some souvenirs during my visit to Alhambra. By purchasing a silver coin belt I was hoping that somehow I’d be taking home a piece of this impressive palace to add to my wardrobe, even though it was probably made in China.

Any trip to a big urban city takes you to shops selling a variety of clothes. One can buy a Moroccan Caftan in one shop, an Indian Sari in the other or a pair of jeans to sport a more international look in the next. This is where globalization starts to excite me, hybrid culture leads to hybrid fashion. We all remember No Doubt front woman Gwen Stefani wrapping a dupatta (scarf) around her hips and sticking a bindi on her forehead to add a little spice to her rock look. There are many examples of ‘hybrid’ fashion and ways to combine cultural elements into your outfit. I will be sure to share some examples in my next blogs and will try to interest you in the diversity that is available.

We are all curious when it comes to new cultures. As I have told you in an earlier post, after Carrie Bradshaw wore a turban in ‘Sex and The City 2’ everyone in the West suddenly gained interest in this clothing item. Dare I say, I would love to own a pair of Arabic curly toed slippers like the ones Carrie picks up at the Souk in the movie. As you can read, I love to borrow from other cultures and be inspired. On my trips to London, I make sure to visit Harrods, where I often see many Arabic women dressed in the Abaya, some looking stunning in their embroidered versions, with a touch of lace or teamed up with a golden waist belt. I am sure that if one day I get to visit the Middle East I would want to wear an Abaya to experience this way of dressing and get some inspiration.

At university I got the opportunity to read a cultural studies piece by Edward Said on Orientalism. Orientalism being the way in which the occident (the West) depicts/perceives the orient (the East/ non Western countries). According to Said this way of viewing the orient from a Western perspective was often patronizing and stereotypical. The orient is often shown as exotic or overly romantic. I guess we tend to think people in India break into song and dance when in love and we all know the 1001 nights theme parties thrown by event managers tend to be a tad cheesy. I am sure scientists and specialists on orientalism just want us to know that there is more to culture than what stereotypes tell us. Which is why I wanted to start my fashion blog, showing my favorite designs and designers from the orient. To create a platform for multiple fashion perspectives.

To conclude this post I would love to share a few examples. 1. A perfect example of orientalism in fashion is the Louboutin ‘Bollywood Fever’ heel, it is very bold, but fun nevertheless. 2. A creative two piece Abaya by Emirati designer Badreya Faisal from her BLEACH collection, a traditional gown with a modern twist. 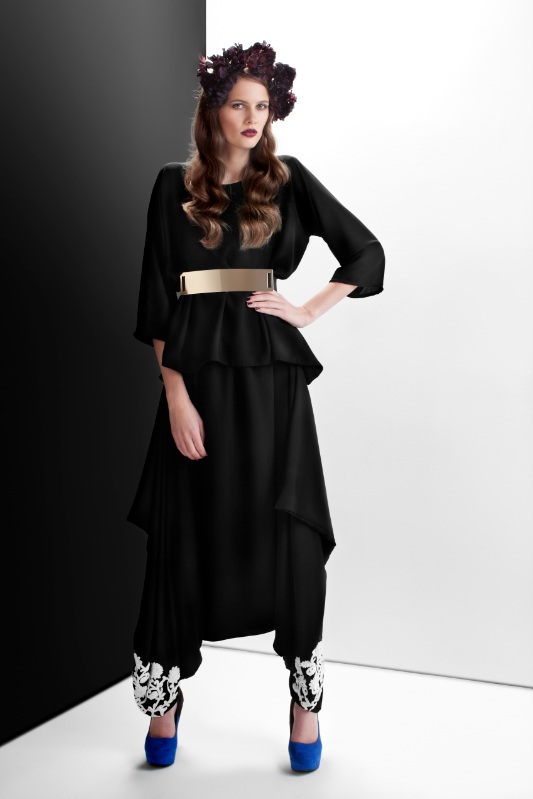